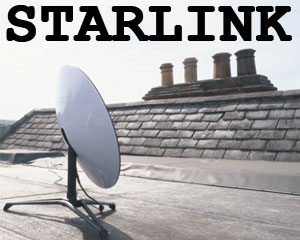 With the initial trials of SpaceX Starlink drawing to a close with positive results, some people in the datahoarding community are considering subscribing to the service. If you live in an urban area with good Internet connectivity this post will be of limited use to you. If however, you live in a rural area and are an aspiring datahoarder then this post may answer some of the questions you have. Bear in mind that the service is only just reaching general availability so parts of this post are based on assumption rather than evidence. I’ll try to keep it updated, however, as more details emerge.

Starlink differs from “traditional” satellite Internet services in that it operates a large number of low-orbit satellites. The fact that they’re low in orbit means that they’re able to offer much better performance, both in terms of connection speed and latency.

When will Starlink be available?

There’s currently a trial/beta service in place. This trial is reaching its conclusion and interested customers are being invited to sign-up now. You can enter your address at the Starlink website and it’ll tell you when you can expect the service to be functioning. I’ve entered a number of addresses across Europe and the website has estimated Starlink will be available in mid-2021.

The company have also annonced that by the end of 2021, Starlink will be available to the entire populated world.

Do you need a satellite dish for Starlink?

Yes, to use Starlink, you need to use a proprietary dish, nicknamed Dishy McFlatface (yes, seriously). There’s also some additional equipment needed but it’s all provided in one package directly from SpaceX/Starlink when you sign up for the service.

How fast is a Starlink Internet connection?

To a datahoarder, one of the most important features of Starlink will of course be its download speed. We don’t want it to be taking days to download large movies, TV shows, etc.

At the moment, most users taking part in the Starlink trial are reporting download speeds of between 50 and 150 Mbps. Upload speeds appear to max out at around 30 Mbps.

The truth is, at the moment nobody really knows what the true speed of Starlink will be once the trial is completed and the floodgates are opened to the general public. There are also a significant number of additional satellites yet to be launched.

Elon Musk has commented in the past that Starlink will eventually reach speeds of 1 Gbps downstream. It’s not clear however if this will be in all locations or if it will be lower in areas of congestion, for example.

While the current speeds of 50 – 150 Mbps are quite adequate, hitting 1 Gbps would be a game-changer for a number of datahoarders. In areas where Fibre connections aren’t practical or aren’t available, a gigabit broadband connection just isn’t possible at the moment. Hopefully, Starlink will address this.

Is there a data cap on Starlink?

As mentioned, the speed of the Starlink connection is going to be really important to most data hoarders. Arguably what’ll be more important, however, is the lack of any data cap or download limit. It’s no use having a speedy 1Gbps download speed if it means you’re going to hit a data limit in a couple of hours because you’ve downloaded too much.

At the moment, we know that the Starlink trial does not have any download or upload caps. On the Starlink subreddit, a Starlink employee responded to a question around data caps with this statement:

“So we really don’t want to implement restrictive data caps like people have encountered with satellite internet in the past. Right now we’re still trying to figure a lot of stuff out–we might have to do something in the future to prevent abuse and just ensure that everyone else gets quality service.”

I’ll let you draw your own conclusions.

Something of interest is that in areas where Starlink won US government funding through the “Rural Digital Opportunity Fund“, they’re not permitted to implement any data caps at less than 2TB. This requirement may lead Starlink to implement a two terabyte data cap across the board.

How much will Starlink cost?

At the time of writing, the cost of Starlink is as follows:

So, your initial outlay will be £582 or $648, with subsequent months costing £89 or $99. If you’re currently in an area serviced by high-speed fibre, these costs may not seem attractive to you. For example, in the UK, BT have announced that its gigabit “Full Fibre” FTTP offering will cost £59.99 per month with an upfront cost of only £9.99.

If on the other hand, you’re in an area with an ISP monopoly, you may well consider Starlink to be a bargain. Hopefully, due to economies of scale, the equipment cost will come down in the future.

Is Starlink the same as 5G?

No, not really. 5G is the current generation of Internet service based on mobile/cell phone infrastructure. 5G requires a subscription with your mobile telecoms provider. 5G also has a relatively short range, requiring base stations to be dotted around towns and cities. In rural areas, where there isn’t Internet infrastructure (fibre, for example), 5G won’t really be possible. By contrast, Starlink is long-range (from Space!) but of course, requires line-of-sight between the satellite in orbit and your dish.

How many satellites will Starlink consist of?

According to FCC and ITU filings, Starlink will eventually consist of up to 42,000 satellites.

As of May 2021, it’s estimated there are currently 1500 Starlink satellites in orbit, with a further 1200 planned for deployment before 2022.

What’s the size of a Starlink satellite once in orbit?

What’s the size of the Starlink dish (AKA Dishy McFlatface)?

The Starlink dish (Dishy McFlatface) is circular with a diameter of 59cm.

Can you torrent over Starlink?

Yes, you can upload and download files using the BitTorrent protocol over Starlink. That said, like with all other broadband connections, you mustn’t torrent any copyrighted material. If you were to torrent, for example, a Hollywood blockbuster over Starlink, you would likely receive a warning from Starlink reminding you of their acceptable use policy.

A Starlink user recently took to Reddit to reveal he’d been torrenting over Starlink without a VPN connection to see what would happen. Of course, he received a warning. If he continues, he’ll probably be disconnected.

Can I move my Starlink equipment to another place?

At the moment, you can’t officially move your Starlink equipment to another location without updating your Service Address. This is because the Starlink satellites work in cells to cover a certain area. In other words, they know which customers fall under their area and aren’t able to service other customers. Of course, if you’re just moving you’re equipment a short distance (say, to another property in your town), you’ll probably be OK as the new location will likely fall under the same satellites as your official location.

Starlink have recently stated that they intend to offer a mobile version of Starlink (for ships, motorhomes, etc) so this may change as the mobile service will likely need the satellites to be better at serving customers who aren’t within their footprint.

Does Starlink need a separate uplink?

Some traditional satellite Internet services require you to have a separate Internet uplink, for example, a DSL or dial-up modem connection. This is because the satellite at the user’s end is only capable of receiving and not transmitting. For example, if the user wanted to browse the BBC website, his computer would send a request over the traditional slow Internet connection (such as a phone line) saying “Hey, Satellite Internet company, send me bbc.com”. The Satellite ISP would receive this request and beam the contents of the requested BBC website over the satellite.

As you can imagine, this has a few disadvantages:

Fortunately, Starlink does not need an existing Internet connection. The Starlink dish at the customer’s end is capable of both transmitting and receiving (i.e. it can speak to and hear from the orbital satellites without any help).

Can Starlink be used for gaming?

Yes, Starlink can be used for gaming, as confirmed by Elon Musk himself. The concern most gamers have when selecting a new Broadband service is the amount of latency. To put it simply, how long it takes a packet you send from your computer, to reach the computer or server at the other end.

For example, a data packet sent from your computer to a server in the same city should be received very quickly, hence the connection would be deemed to have low latency. On the other hand, sending or receiving a packet from the other side of the world is going to take a little longer, therefor it would have high latency.

Sometimes latency is introduced in other ways, for example, by the infrastructure used by your ISP being insufficient or located too far from you.

As we’ve mentioned, Starlink has much lower latency than traditional satellite Internet services as its satellites are in low earth orbit so the signals don’t have as far to travel.

Starlink aim to have latency down to around 25ms once it’s in its full production rollout.

Can Starlink be used for latency sensitive applications such as VOIP, Skype, Zoom, etc?

Yes, as stated in the previous answer, Starlink aim to have a latency of just 25 milliseconds. This is low enough for applications such as VOIP (Voice over IP) and even video conferencing applications like Zoom and Skype.

As with gaming, these applications are sensitive to latency as if it’s too high it results in choppy audio and video. People also end up talking over each other or thinking the other party has left the call. This shouldn’t happen with Starlink though as 25ms latency is well within tolerance of most of these applications (Microsoft for example, state that Skype for Business requires a round-trip latency of less than 100ms).

Can I pay for Starlink using Bitcoin or Dogecoin?

Elon Musk recently stated that customers are now able to purchase Tesla cars using Bitcoin. This caused quite a stir and caused the price of Bitcoin to surge, likely in part due to the company stating that Tesla will begin running their own Bitcoin system, running Bitcoin nodes in-house.

Following on from this announcement, it was stated that SpaceX were funding a trip to the moon using another cryptocurrency called Dogecoin (DOGE).

UPDATE MAY 2021: Elon Musk has today tweeted that Tesla will no longer accept Bitcoin as a payment method. It would follow reason that SpaceX will not be allowing Starlink to be purchased using Bitcoin in the future. Musk stated that he still believes in cryptocurrency and that he had been working with Doge developers. If anything, I would say this suggests Starlink could one day be purchased with some form of cryptocurrency, possibly Dogecoin.

Can I invest in Starlink / Will there be a Starlink IPO?

At the moment, it’s not possible to invest directly in Starlink through the stock market. The company announced a few years ago that there would be an IPO at some point in the future but didn’t give any timeframe.

Since then, Elon Musk has stated on Twitter that there will likely be a Starlink IPO but not for a few years. The reason he gave was around cash flow/valuation. On a positive note, however, he’s said that retail investors will get top priority, something that’s quite unusual.

We’ve addressed a few questions on what Starlink is and isn’t. We’ve also speculated on what it may become given its relative infancy. As for whether or not you can use Starlink for hoarding data, it’s too early to say. It really depends on how the future decisions around speeds and data caps play out. It’s also likely to not be your first choice for downloading colossal amounts of data if you’re based in an area with competitively priced fibre available to you.